Master Michael Tse is one of the most well-known teachers of Qigong, Chinese Martial Arts and Chinese Culture in the west. Through the loyalty to his teachers and hard work and dedication, he has built up a strong following of students all around the world. When he was ten years old, he went to see his first Bruce Lee movie, Enter the Dragon. Like everyone else in the cinema, he was caught up in the Bruce Lee fever and cheered Lee on with the rest of the audience during the movie. That moment changed his life and from there he began his dream of becoming a martial artist.

Although he did not know any martial art skill, he began to imitate the movements he had seen on screen and also to do more physical things, like press ups and running. Then at the age of fourteen he got the opportunity to study Wing Chun Kung Fu with his uncle through the following event. He says, “My grandmother had sent me to walk her dog which was quite large. Somehow, I tripped and landed badly on my wrist, fracturing it. At that time, people did not have the modern treatments they do today and so I was sent to my uncle who was a bonesetter and herbalist. He manipulated my bones by quickly clicking them back into position. Afterwards, he tied some wooden splints to my forearm and then bound them with a few strips of cloth. In this way, the skin was still open to the air and could breathe. While my uncle was treating me, I saw some people in the next room doing some sort of martial arts and asked him what it was they were doing. He said it was Wing Chun Kung Fu. I was so excited. Straight away I asked him if I could study with him. My family was quite poor and so it was arranged that I would help him by gathering herbs and doing other chores. Then he would teach me in exchange. This is how I began my Wing Chun training”. 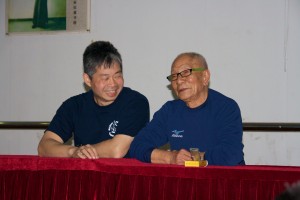 “When my uncle passed away, I had to find another teacher. I had heard of Grandmaster Ip Chun and also had seen an ad for his class. Soon after that I became Grandmaster Ip Chun’s student. He helped me to understand the subtlety behind the power of Wing Chun, using less strength and less energy to defeat your opponent.” Michael Tse remains very close to Grandmaster Ip Chun even after so many years. He says, “Sifu is a true gentleman and one of the most amazing people I have ever met. Not only is his skill outstanding, but also his attitude and out-look on life. I am very lucky to find a teacher like this.” Michael Tse says, “It has been over forty years since I began my martial art and Qigong studies. In 1990, I set up theTse Qigong Centre in England where students from around the world have joined to train with me. 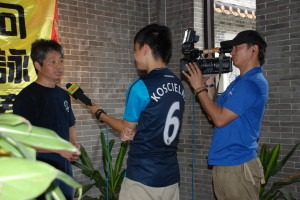 In 1999, I set up a North American branch of the Tse Qigong Centre in Washington, to help more people benefit from the skills I have learned. In addition to teaching, I also write books and make DVDs. Writing is very enjoyable and gives me an opportunity to explain my thoughts and more about skill in greater detail. I am happy to see the Centre growing. For me, the Centre is like a family. The more people who join in, the happier I am because it means more people are growing healthier. We now have many instructors throughout the world who are authorised instructors of the Tse Qigong Centre.”