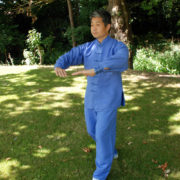 How Many Bóng Sáu 膀手? Pt3

So far, we have seen that traditionally there are three kinds of Bóng Sáu 膀手. The normal Bóng Sáu, which is soft, and Chìhn Bóng Sáu 前膀手 and Wàahng Bóng Sáu 橫膀, which are both hard. Then I invented another Bóng Sáu which I call Chèunhg Bóng Sáu 長膀手 – Long Bóng Sáu, which is also soft. In my school we have four kinds of Bóng Sáu. This raises one important question; can we invent new techniques in Wing Chun? There answer is yes, but there is one condition. This condition is that we must already know the existing techniques so well and we can use all of them properly, then we will find we might need other techniques to supplement them in a certain situation, or it might just happen when we are doing Chī Sáu 黐手. During Chī Sáu, you may do something which is following the correct Wing Chun principle, then a new technique might suddenly happen. This has happened throughout the whole history of  Wing Chun. My Sīgōng 師公, Ip Man 葉問, has done this, and my Sīfú 師父, Ip Chun 葉準, has also added his own techniques which you will not see outside his school doing. As for myself, I have my own techniques, and even have a Double Bóng Sáu – Sēung Bóng Sáu 雙膀手. So how many kinds of Bóng Sáu are there? There can be more than four, maybe other Sīfú’s and Sīgōng’s have their own Bóng Sáu’s. This is all OK and normal, the only things that really matter are, do they work and do they follow the correct Wing Chun principles.