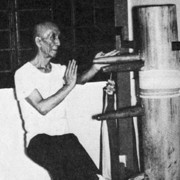 When Ip Man 葉問 was living in Foshan 佛山, his family were so rich that he did not have to work and so he had a lot of social time. He enjoyed meeting his friends and going sight-seeing. One Autumn, Ip Man went to a public function with some lady friends. There were a lot of people there and so there were also many policemen around keeping the crowds in order. One particularly aggressive policeman saw Ip Man accompanied by a few ladies. He immediately felt jealous of the young rich boy who had the attention of so many ladies. So, he went over to Ip Man and tried to push him to one side. Of course, Ip Man immediately block his push. This made the policeman, whose name was Yùh Yiùh 余耀, very angry. Yuh Yiuh pulled out his pistol and pointed it at Ip Man. Without thinking, Ip Man grabbed the pistol and using the strength of his finger broke the barrel of the pistol, making it useless.  All the people around had seen what had happened and were now staring at Yu Yui. Yuh Yiuh was so embarrassed, he did not know what to do, he also knew that he could not cause trouble. He let Ip Man go and said, “Sorry”, and then moved back into line with the other policemen. Eventually Yuh Yiuh leant the name of that young man – Ip Man. A few years later, Ip Man joined the Foshan Police Force and even became Yuh Yiuh’s commanding officer. When that happened, Yuh Yiuh thought to himself, “Its lucky I did not cause trouble with Ip Man!”