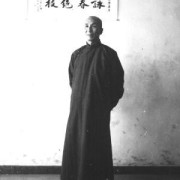 Ip Man 葉問 One Against Many – Part 3

The passengers on the ferry gradually disembarked, including Ip Man 葉問 and the gangsters, who were laughing and joking with each other. They acted as if they could do anything and that no one would dare to challenge and stop them. They were wrong! Just near the ferry pier there was a small tea shop with tables and chairs outside. Ip Man sat his son down. Ip Chun 葉準 was still crying, and his cheeks were wet with tears. Ip Man smiled at him and said, “You stay here. Don’t go anywhere. I’ll be back soon.” Ip Chun nodded and then Ip Man took of his long robes and gave it to his son to look after. The Long Robe are traditional Chinese style clothing and was Ip Man’s favourite way to dress as they were comfortable and loose so that you could move easily in them.

Ip Man made his way back towards the pier, it was not far, and he soon found the gang. He walked directly towards them. The gangsters saw him and were surprised that he had come back to face them. This time he was dressed more simply and as he approached them; he began rolling up his sleeves so they could see his forearms. Ip Man pointed at the man who had spilt the soup and said, “You need to apologise!”