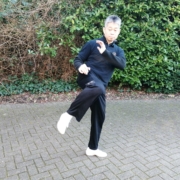 Gāan Geuk 挌脚 is like Gāan Sáu 挌手. Gāan 挌 means block, so with Gāan Sáu we use the hand to block, but with Gāan Geuk we use the leg. We perform Gāan Geuk by lifting the leg with the knee bent and the knee in (closer to the Centre) and the lower leg and foot slightly out. The leg should be a quite firm so that it can block an attacking kick. We will use it just when the opponent starts to kick and so the distance between us will be close. Once we block with the lower leg, we will step forwards and we place the foot down, and use our hands to attack them. Gāan Geuk is therefore used to block a kick before it the attacking kick has reached full power. If the kick is already at full power, we should not use Gāan Geuk to try and block it because it is not strong enough. Also as we would be standing on one leg, our balance would not be firm enough to block such a powerful attack. It can however block a normal kick. If the kick attacking us is very strong, then we can step back, or use Double Crossed Wuh Sáu 護手 to block the kick and at the same time kick their standing leg, or instead of kicking just rush forwards with the Double Wuh Sáu and push them over on to the floor.