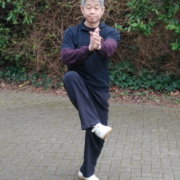 Bóng Geuk 膀脚 is like Bóng Sáu 膀手 – Wing Hand, so Bóng Geuk is Wing Leg, where the leg is just like Bóng Sáu. The correct position of Bóng Geuk should be the knee is out and higher than the ankle, the same as in bong so where the elbow is out and higher than the wrist. In Bong Sau we divert the opponent’s energy, but Bóng Geuk is more like Dāi Bóng Sáu 低膀手 where the Dāi Bóng Sáu pushes the opponent to make them lose their balance, Bóng Geuk is similar. When we use Bóng Geuk, first we lift up the leg when the opponent kicked us to block it, once we have blocked their kick with the outside of our lower leg, we then push that kick back with the lower leg, so it is like Dāi Bóng Sáu. However, we need to make sure that we stand very firmly because a kick that comes at us can be very strong and can knock us off balance, so it is important to be strong enough to block their kick, hold our balance and immediately push their leg to them to make them lose their balance. we must go forwards and attack them with their hands even another kick.