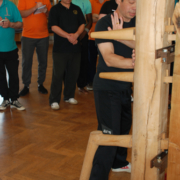 According to my Sīfú 師父, Grandmaster Ip Chun 葉準, all the forms in Wing Chun  traditionally had 108 movements. However, today we only hear about the 108 movements in the Muhk Yàhn Jōng  木人樁  – Wooden Dummy form. So why did our Wing Chun Ancestors choose 108 movements? We all know that Síu Lihm Tào 小念頭 is a short form and Tsum Kìuh 尋橋 and Bīu Zī 標指, are a little longer, but of similar length to each other. None of them are as long as the Wooden Dummy Form. So why traditionally were there 108 movements? Before we talk about why we used 108 movements we must all first realise that the forms we practise today are not the same as the forms practised in the past. I do not mean the techniques were different, as I think from the time of Sījó Lèuhng Jan 梁贊師祖, the techniques were very similar (or even the same), and even the order the movements will have been similar.

In the past I believe there was a lot more repetition of the movements. So for example in the first part of Síu Lihm Tào might have been the same, but in the second part, Faat Ging, each movement may have been repeated three times and the same with the third part. This might make the movements add up to 108.