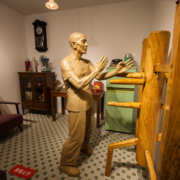 In the past, in China, challenge fights were very serious. However, sometimes they could be gentler, and this would be when the two master already knew each other and wanted the test their skills. In this situation, they would be gentler with their techniques or only hit with a light touch, with a lot of control, so that they would not hurt each other. They would still know who was better and earn each other’s respect.

There is a story in Fàht Sāan (Foshan) 佛山 in Southern China. Once a master came arrived from the north of China. His Phoenix Eye Fist 鳳眼拳 was very powerful. A Phoenix Eye Fist is not like a normal fist. The knuckle of the middle finger sticks out making a sharp point. This master had trained his fist so that it was very powerful and if he hit someone with it, particularly he hit their acupuncture points they would be severely injured. He challenged all the masters in Foshan, but no one came to accept his challenge. After a while only a young Ip Man 葉問 accepted the challenge. Ip Man used his Wing Chun skill to defeat the master who had no chance to hit Ip Man with his Phoenix Eye Fist! Ip Man used his Wing Chun Chī Sáu 黐手 technique to feel his energy and control him. After northern master was defeated his left Foshan and never returned. So maybe, this story inspired the one in the Ip Man movie.