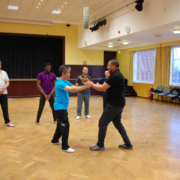 Although we learn Kūng Fū 功夫, we might not need to use it, or if we do it might happen so quickly that we are not expecting it. When I was a policeman in Hong Kong, I was once patrolling in the Hong Kong Underground, which is called the MTR (Mass Transit Railway). Whilst I was at Kowloon Tong station it was rush hour and there were many people rushing about from to get their trains or leaving the station. I noticed one young man behaving suspiciously, so I approached him and asked him for his Identity Card. In Hong Kong, by law a Hong Kong Policeman has the right to ask anyone for their Hong Kong Identity Card, this was because there were a lot of illegal immigrants in Hong Kong that time. Suddenly the young man ran, I was so quick to catch him! However he still tried to get away, so I swept his legs and he fell to the floor. I knelt down and grabbed his hands whilst pulling out my handcuffs and locked his hands together. I thought he was an illegal immigrant, but when I searched him I found heroin in his pocket!