What Will I Learn in the Wing Chun Classes? 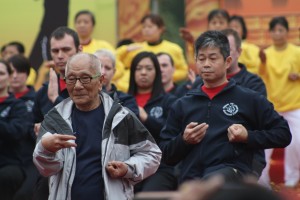 When we learn Wing Chun Kung Fu, we begin by learning the form Siu Lim Tao which helps train our stance and internal energy. It is also like a meditation as we perform it very slowly and so the mind becomes calm and clear. When the mind is calm, then we will not be afraid in a fighting situation.

Michael Tse trains his Wing Chun students in the traditional way and so the forms are very important. Each of Wing Chun’s three basic forms have their own principles and purpose to help the student become proficient. To neglect the forms means you neglect a very important part of the Wing Chun training. He says, “All Wing Chun’s forms are important but it is like building a house. First you build your foundation, which is
like the Siu Lim Tao form and then you build your walls and roof,
which is like the Tsum Kiu and Biu Ji forms. The Wooden Dummy, Baat Jam Dao
and pole training are the decorations. However, without a wall, how can you hang a picture?” 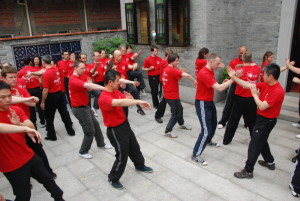 The next part of training is the actual practise of the techniques and their applications. Michael Tse says, “These techniques should become like your friend and be very familiar to you. We do this through Chi Sau (Sticking Hands training between two people.) In this way, when you do Chi Sau, you will not be frightened. Chi Sau also helps train your sensitivity and footwork. Without any one of these elements, then your Wing Chun skill will not be good.”

Wing Chun also has two weapon forms:- the Wing Chun Pole (Luhk Dim Bun Kwan) and Butterfly Knifes (Baat Jam Do). The Wing Chun pole form has only six and a half movements and so it is not difficult to learn, but it is much harder to practise as it is very strong training for the arms and legs. Michael Tse says, “If we do not have strong legs, we will not have a strong punch no matter how much other training one tries to do, like lifting weights or using a punching bag.” 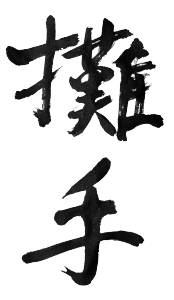 “Our legs are our root and it is where our power comes from. If the roots of a tree are not strong, then any high wind can knock it down or cause damage. Wing Chun considers leg training through the form Siu Lim Tao and also through the Wooden Pole training. That is why in all traditional Chinese martial art skill, leg training comes first.”

The Baat Jam Do (Eight Section Knife) is more complex and uses techniques found in the first forms and Chi Sau. It helps train footwork and develop arm strength and joint flexibility. It also develops correct use of energy and coordination. 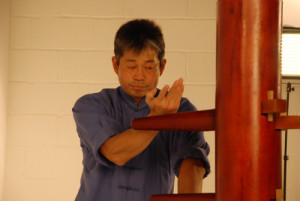 The Muk Yan Jong (Wooden Dummy) was used in traditional training when one did not have an opponent. It has a eight section form which develops all the Wing Chun skill plus kicking. Michael Tse says, “Many people attack the dummy aggressively but this actually defeats the purpose of the training. By working with the dummy, we can refine our footwork and body position for attacking. Because it does not move, it allows us to check whether our attacks are accurate. An inaccurate strike will miss the dummy and in a fighting situation, potentially an opponent.”

Wing Chun is a very complete skill. It is very clever in that it uses less energy to defeat stronger energy. Grandmaster Ip Chun says, “The highest level martial art skill is the one that uses the least amount of energy to defeat an opponent.”

Wing Chun skill is a martial art that you can practise for life and is not for just the very young or strong. With proper practise, you will become healthier and more balanced and will understand the true nature of learning a traditional Chinese martial art.

Michael Tse says, “When a person begins to apply the Wing Chun principles to his life, this is the higher level of Wing Chun training. For instance, if we are trying to call a friend on the telephone but the first friend we call is not there and then also the second friend and third, then we know that the energy is not right and so we can stop and wait for later when the time is right. It is the same if we keep trying to attack someone but cannot do so in a clean way. Instead of trying to force our way through our opponent’s defence using strength, we should wait until we can create an opening and then attack. Otherwise we will
waste our energy and go against the Wing Chun principle.”