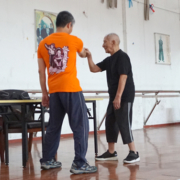 After the Chī Sáu 黐手 Grandmaster Ip Chun 葉準 said,”I am 95 years old. At my age I am not as strong as both of them. They become tired I am alright. This is because they used energy while I did not. If I tried to use energy to go against their energy I would lose and I would be tired.” He continued to explain that Wing Chun uses soft energy to control strong energy and is a skill where a smaller person can handle a bigger person. We have a Chinese saying “Yi Rou Zhi Gang 以柔制剛 – when people use energy you do not.” Sīfú said that using correct positions and angles was the Wing Chun method. He continued to say that he had refined this in the 20 years since he had been to the UK. He gave us an example and asked me to punch towards his face. He used Fāt Sáu 拂手 to block my punch, but he did not move his body. He said that this was using force against force and therefore the stronger person would win. He then demonstrated again and asked me to punch again. He used Fāt Sáu again, but his time turned using Jyún Máh 轉馬. His Fāt Sáu very gently reached my punch and diverted it to the side. He said that his Jyún Máh allowed him to divert my punch, using less energy and allowed him to get a good position.