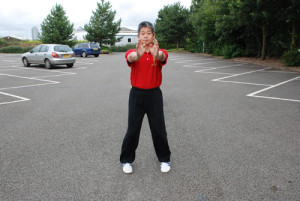 In Tsum Kiu, after we have opened our stance, we mark the Centre, then we punch and then we perform Tsum Kiu Sau尋橋手. This is an application of our Kiu Sau橋手, our bridge hand. Normally we will attack our opponent with a punch, palm, chop our even our fingers. Not many people will use their forearm as a weapon, but we will use it. Since the form is called Tsum Kiu, we call the technique Tsum Kiu Sau. It is like a punch, fist we should be relaxed until we get our Kiu Sau as close to our opponent and then release our power (Fa Ging發勁). The Kiu Sau is more powerful than a punch or palm, but the downside is that we need to be much closer. Therefore we are more likely to attack with a punch, palm, our fingers since these will be quicker to use than the Kiu Sau. However, if the distance is close enough then using the Kiu Sau will be more powerful and it can even break the opponent’s arm our ribs.

When we use the Kiu Sau we must use our whole body, from the stance, waist to the Kiu Sau. Then we will generate the most power.