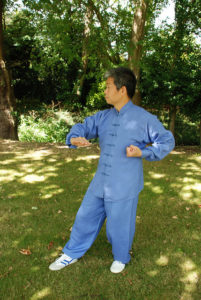 Tsum Kiu尋橋 has three sections, just like Siu Lim Tao小念頭. When we study Wing Chun we will notice that Wing Chun likes to do things three times and there are three and also eight sections. How do we know there are three sections in Tsum Kiu? For this we need to understand the form. Tsum Kiu is about training footwork and also about the Kiu Sau橋手, the forearm. Without the correct footwork, the contact with the Kiu Sau has no meaning.

There are three kinds of footwork in the form. The first is Jyun Ma轉馬, turning stance. In the first movements we turn forty-five or ninety degrees, whether we turn forty five or ninety, the stance is the same only we turn more with the upper body. This is the first sections. In the second section, we train Waahng Ma橫馬, walking sideways. The third section is Jun Ma進馬, walking forwards. These are the three major kinds of footwork in Wing Chun, however Wing Chun actually has seven kinds of footwork, which I call 7 Star Footwork詠春七星步法, but if you also count standing still then there are eight kinds of footwork. So eight is a lucky number in a lot of traditional Chinese skill and many Kung Fu skills are based on the number eight. This is because eight means cover all aspect, it means it is whole and completed in the Yijing易經