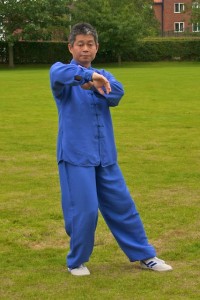 Jyun Ma 轉馬 is the first footwork we learn in Wing Chun and it is a very important part of Wing Chun. Before this we have our facing stance Yih Jih Kihm Yeung Ma二字鉗羊馬 , which trains us to be in close range and with two hands in contact. If we do not have two hands in contact we should not hold this position. When we are at long range, we should stand with one leg forward and one behind like in Jeun Ma進馬, but stationary and not walking. When you are in close range and have contact with either one or both hands then we can turn our stance forty five degrees as this makes our position narrower and also moves one side of the body further away from the opponent. This makes it easier to control and attack him at the same time. So in Chi Sau黐手an also in fighting it is a very good skill. Of course we must learn which side we should turn to otherwise we will be hit and many times in Chi Sau beginners will be hit because they turn towards the way their opponent is attacking. So they need to build up their experience in Chi Sau. Jyun Ma can be used together with Bong Sau膀手, Taan Sau攤手, Fuk Sau伏手 and Wu Sau護手. Actually it can be used with almost all hands like Laap Sau擸手, Gaan Sau挌手, Chong Kuen沖拳 and Waahng Jeung横掌 as well.