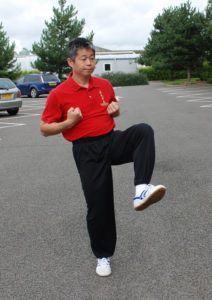 In Tsum Kiu (Chahm Kiuh) 尋橋  we kick three times. The first kick is after Jyun Ma轉馬 and Waahng Laahn Kuen橫欄拳, where we do Chaan Geuk鏟腳. The second kick is after Wang Ma, when we have withdrawn our fists and turn the body then we do the Dang Geuk蹬脚.  The third one is the same Dang Geuk which we do after the Biu Ji標指, Jat Sau窒手, Yan Jeung印掌. We withdraw the fists and then turn back 45 degrees on the left heel and the right toes. We then kick and this is Dang Geuk.  This is exactly the same kick, but the meaning is different. With the first two kicks we expect we will kick the opponent correctly, but with the third kick we expect the opponent will move so we will miss the kick. If we miss our kick we will be in a very dangerous position and we must cover up the situation with another technique. In the form this is Gum Sau㩒手.  Although the Gum Sau is used to block a lower attack, such as a punch, it does not mean that the opponent will attack a low punch or a kick then Gum Sau will not be useful. In this situation we should use a different hand technique, for example a Paak Sau拍手 instead. So in Wing Chun we should always expect that our attack might miss and be prepared to cover our mistake.