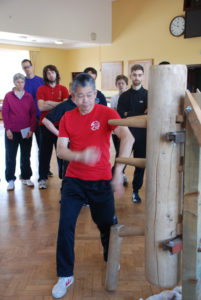 When we practice Tsum Kiu尋橋 we learn to do the Dai Bong Sau低膀手 whilst we do the Jeun Ma進馬, in the third section. however when we continue practicing Wing Chun and go on to learn the Wooden Dummy 木人椿 we will learn another kind of Dai Bong  and this time the technique is what we expect the Dai Bong should be, it should really call Dai Bong. In Tsum Kiu the Dai Bong is more like a Hard Bong Sau. This means there are two kinds of Dai Bong and they have different movements and positions.  In the Tsum Kiu Dai Bong, the elbow is a little lower than armpit level and so it is just lower than a normal Bong Sau  where the elbow and shoulder are on the same level. As it is lower we call it Dai Bong, but the energy is much harder and the application is quite different.

In the Wooden Dummy we first use the Dai Bong in the third section. This is a much lower Bong Sau and so we also call Dai Bong.  This time the Dai Bong is at stomach level and bounces a low attack to the side, and also harder than a normal Bong Sau.

So in Wing Chun there are three different kinds Bong Sau. The normal Bong Sau is soft the elbow is shoulder height and it redirects the opponent energy to the side. In the Tsum Kiu Dai Bong Sau elbow is a little lower than the armpits and the technique is used to push forwards and push your opponent away from you.  In the Wooden Dummy Dai Bong elbow is lower so the Dai Bong covers the stomach area and the technique bounces and direct your opponent energy sideways.