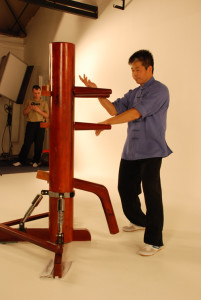 Gaan Sau is made from two kinds of Gaan Sau, Upper Gaan Sau and Lower Gaan Sau. The Upper Gaan Sau looks a bit like Taan Sau 攤手, as the palm is open and the middle finger is throat height. The Lower Gaan Sau the palm faces in and the hand is waist height so that the point two fingers above the wrist lies on the Centreline. These two form the complete Gaan Sau and they block any attacks from the outside in. It is rare that we use Gaan Sau, but when we have no contact, our opponent keeps attacking and we have no room to step back then we use Gaan Sau to block all the attacks. Again we only use it 3 times and then when we have contact we will use Laap Sau 擸手 together with a punch or a Pek 劈 to finish them.