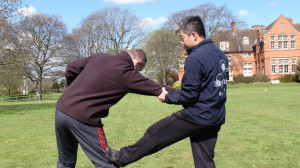 Sometimes we come across people who will try to kick us while we are practising Chī Sáu 黐手. Generally this is wrong.  Why is it wrong?  Chī Sáu should just involve the hands and not kicking, but it does not mean we should not use kicking techniques.  If we want to use kicking techniques then both partners should know so that we can both use kicking during our Chī Sáu.  One person should not just suddenly kick since the other person was not expecting it I was simply taken by surprise. When our Chī Sáu reaches a certain level we should sometimes also use kicking and in this way we will learn more about kicking.

However in some way, kicking at such a close distance is not so good. When you are so close to each other anyone can kick the other person. During a fight this would not happen because you will not let someone get so close to you. A real fight will start further out and without any contact at all. As such kicking should involve being at a longer distance first and without contact, but if someone kicks us while we are doing Chī Sáu we should also start to use kicks, sweeps, knees in fact all kicking techniques. However we must realise that this is different from just Chī Sáu and is more like fighting. In the end we should be able to do both. If our Chī Sáu is good in the end our fighting skill will be good.