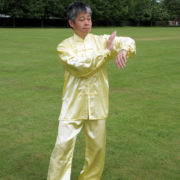 Having escaped she hid herself in White Crane Temple 白鶴寺. Whilst she was there, Ng Mui witnessed a fight between a crane and a wild cat. The crane jumped up and down using quick footwork, gentle movements of its wings to defend itself, together with its beak to attack the wild cat. Even though the cat was much heavier than the crane, with its skilful movements and good position the crane was able to defend itself and defeat the cat who ran away. So the crane won and seeing this gave Ng Mui new ideas and inspired her to create Wing Chun Kung Fu.