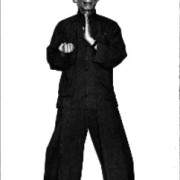 One day, Ng Mui Si Tai 五枚師太 was walking through the countryside when she came across an unusual sight. A shepherd was trying to lead a goat with a rope. In general a man is stronger than a goat, but as hard as he pulled on the rope he could not move the goat! It was very strange! Ng Mui Si Tai stopped to watch what was going on and to find out how the goat could be so powerful.  She realised that the goat has turned its front legs inwards and this was what made the goat strong enough to resist the shepherd pulling on the rope.

This made her think and so she turned her toes inwards and heels out. She realised that this was a strong position. She also experimented and found that if the stance was too wide, although it was strong it was not comfortable or easy to move with, but when she kept the stance shoulder width it was strong and also mobile. She then created some footwork to go with the bent knee and shoulder width position. This footwork was very important and she created seven moving stances and one stationary stance. The stationary stance she called, Yìh Jih Kìhm Yèuhng Máh 二字鉗羊馬. Yìh means two, like two legs. Jih means Chinese character. Kìhm means gripping, Yèuhng manes goat and Máh means stance. So all together it means two legs gripping together like a goat stance.