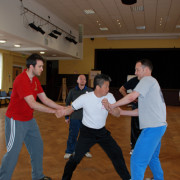 Ng Mui Si Tai 五枚師太 observed Yìhm Wing Chun 嚴詠春 training. She had grown from a gentle, innocent, naive and weak girl into a strong, mature and alert lady. Although she was just 16 years old, these few months of training had changed her.

It was now getting close to the three-month deadline and so Ng Mui Si Tai trained her even harder. She told Yìhm Wing Chun, “When fighting, you need to save your energy and move very quickly. Do not spend too much time blocking. Your purpose is to finish the fight as quickly as possible. Do not block too much and use more footwork. This is why your footwork, movement and position are the most important. One strike is best, two or three contacts maximum. Once you contact your opponent you just need to feel his energy and then use it against him to finish him quickly. Be ready for surprise attacks around you, so always be aware of your surroundings, just in case!”

Wing Chun had to train her eyes and ears and had to look around her. When she was moving she needed to know what objects were on her left and right and what they were doing. When she stood in her stance, she had to relax her whole body to feel what was going on around her.