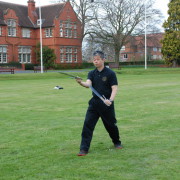 Ng Mui Si Tai 五枚師太 also made Yìhm Wing Chun 嚴詠春 stand still in a wide open space. She would then make some sounds, some far away, some close and some very quiet to see if Wing Chun could hear her. Wing Chun had to train her senses like an animal, she needed to see and hear far away. To become a Kung Fu master she had to train her eyes, ears, intuition and sensitivity.

She then began to train with a set of knives. These knives were the length of her forearm coming up to her elbow. Ng Mui Si Tai had created these knives to match the hand techniques in her new Kung Fu. Wing Chun could use two knives and the techniques matched the hands techniques, Tāan Dōu 攤刀, Jám Dōu 枕刀, Hyūn Dōu 圈刀, Kwan Dōu 綑刀 etc. They were just like her hands only they made her arms longer and her hands sharper! The knives and hand techniques complimented and covered each other. By practising with the two knives, Yìhm Wing Chun’s arms and hands become much stronger and this made her grabbing even stronger! It also made her level of Gung Lihk higher!

The three months were now almost over so it was time for her to go back to her father and fight the leader of the gangsters!