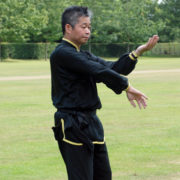 After those three months of hard training, Yìhm Wing Chun 嚴詠春 was now a different person. She was strong, clear minded, determined and she knew that she had to deal with this situation. The problem was the gang leader wanted to marry her and so she had to face him. She decided that the best strategy was to attack the gangsters whilst they were not ready. Yìhm Wing Chun gathered all the things she needed to travel to their base, like water, food and in particular her Baat Jam Dao, a pair of knives that were her weapons. She dressed in dark clothing that was comfortable and good for moving in, and when it was starting to grow dark she set out for the mountain where the gangsters had their base. Their base was only about 5 miles away, but by the time she got there night had fallen, and this meant that she would not easily be discovered. As she got closer to the gangster’s compound, she could see some guards on look out and they all had weapons like swords and knives. They were guarding one building. Wing Chun moved very quietly around the premises and counted all the exits. She also watched what the gangsters’ movements were and remembered their routines. After a few hours she knew there were between 15 and 20 gangsters, which was not a lot, but was on her own.