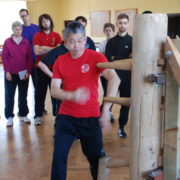 Yìhm Wing Chun 嚴詠春  looked around her, in front of her with the leader and behind her about 10 other gangsters all armed with weapons, swords, broadswords, even axes and sticks. This is what she had trained for, to be aware of everything surrounding her. She quickly pulled out her Baat Jáam Dōu 八斬刀, the short knives that her Sīfú, Ng Mui Si Tai, had taught her. When she was being trained there were many wooden dummies all around her and each one simulated somebody holding a sword, broadsword, sticks and all kinds of different weapons. Now she had to treat all these gangsters as if they were wooden dummies, however, wooden dummies did not move. These were real people who could move around and attack from all different directions. Even though she was faced with many opponents, she moved faster than any of them! Before they could even lift a sword Wing Chun’s Baat Jáam Dōu was already striking their wrists. Many swords dropped out of many hands but more opponents came along. Having seen Wing Chun strike the wrists of their comrades the next group of gangsters was a little hesitant. Wing Chun took the chance to strike the next gangster and her blade hit him on the Taiyang point 太陽穴 on the side of his head. He immediately fell to the ground! Wing Chun charged at the other gangsters hitting the wrists, their legs, their necks, their knees, ankles, shoulders and elbows! All of them became victims to Yìhm Wing Chun’s Baat Jáam Dōu!