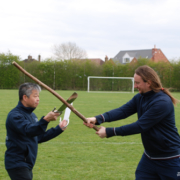 There were now six or seven injured bandits rolling in pain on the floor. The other three or four were too scared to move forwards. Fortunately for the injured bandits, Yìhm Wing Chun 嚴詠春 had not used the sharp edge of her Dōu 刀 to cut them, instead she had used the blunt side of the blade but even so they were all injured by the Heavy Dōu.  The bandits did not like this, they were used to bullying weaker people and scaring them. When someone was good enough to fight back they became very scared, particularly as Wing Chun had a higher level of Kung Fu than them. Even after only 3 months of serious training Yìhm Wing Chun’s level was so high and this was because Ng Mui Si Tai五 枚師太 was the highest level Shaolin nun in Shaolin Temple. Wing Chun was better than people who had been training for years. This is why, when we study we need to find the best, or as close to the best teacher to learn from.