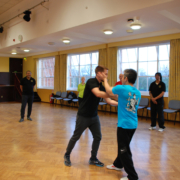 Yìhm Wing Chun 嚴詠春 watched the Leader. He was taller and stronger than all the others bandits, but she knew what to do.  Her Sīfú 師父, Ng Mui Si Tai五 枚師太 had told her, “When your enemy is bigger and stronger, do should not get too close to them. Instead you should use footwork to move around them. Never face them head on because this is their best position. It is better to attack them to the side where you can use both your hands to against one of theirs, while their other hand cannot reach you!” Wing Chun remembered all these principles. She was a woman and so not as physically strong as a man and so she had to use special footwork and angles.

Wing Chun calmed herself and did not move, and put her Baat Jáam Dōu八斬刀 to her waist. She stayed perfectly still and just watched the Leader.  Seeing this, the Leader thought that Wing Chun was afraid of him since he was so big and strong! He moved closer to her and tried to grab her! He still thought she could be his wife! So he did want to punch her hard. He reached out his arms to grab her body and thought he had her when Wing Chun suddenly moved to his right. This was another fighting principal she had learnt, if the enemy does not move we do not move, but once they move we move faster. The Leader found he had grabbed nothing and almost lost his balance! Luckily for him he was strong and could regain his footing. But as he did so he was suddenly struck twice in the face each time with a very loud “whack!” He was confused and did not know what had happened! Wing Chun had struck him twice at the same time as she had moved.