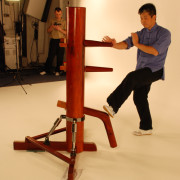 The sword swished down very fast towards Wing Chun’s 詠春 head, but she was even faster! She stepped back to the side and using Dāng Téui 蹬腿, she kicked the Leader’s front knee and at the same time used Yan Jéung 印掌  to palm the elbow of the Leader’s sword arm! He screamed in pain, fell to the ground and the sword flew away.  He could not get back up his knee and his elbow with both broken. Wing Chun had seen his attack coming and at that at that moment realised he was trying to kill her. So this time she used a more deadly strike, but she still controlled herself and her technique was still only a punishment rather than a deadly blow. The Leader had lost and all his gang was silent. No one said a word or moved an inch.

Wing Chun glared at them and said, “If any of you come to Da Liang Mountain 大凉山 again, I will come back and break all of your arms and legs!”  Suddenly all the gangsters dropped down to their knees and sobbing, one of them cried out, “We do not want to be bandits! We just don’t have any jobs and so we just wanted food and shelter!  We will not go to Da Liang Mountain again.  We want to follow you! Become our leader!  Can you accept us?”  Suddenly the Leader shouted out, “Please be our leader! We will do whatever you say!”  This surprised Wing Chun.