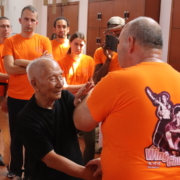 Grandmaster Ip Chun葉準 demonstrated the Fāt Sáu 拂手 and Jyún Máh 轉馬 and then invited everyone to try it. As he walked around the room he noticed that many students’ energy was not right even though they were repeating the techniques, this is because they needed more time to relax and use less energy, so more practise was needed. Sīfú then walked up to one big fellow, Martin McDermott and told him to punch at him. Again he just used Fāt Sáu and Jyún Máh. Martin could not do anything to him. Then Sīfú let Martin do more. Martin used Laap Sáu 擸手 against Sīfú’s Fāt Sáu, but Sīfú changed to Bong Sáu 膀手. As Martin punched, Sīfú’s hand was already on Martin’s chest, he was so fast! Before Martin’s punch had finished he used Laap Sáu again and punched the other side, but again Sīfú changed to Bong Sáu and put his other hand on Martin chest! Again and again Martin tried, but Sīfú effortlessly turned and changed to his Bong Sáu and gently punched Martin’s chest. By now everyone had gathered around and was all laughing and so impressed, as they know how strong Martin is! Many were thinking, “How can he do that?” the seniors all knew that this was his high level skill, using less energy against stronger energy, so even when we are older, we can still do that.