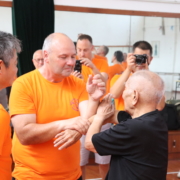 The next it came from Paul. He asked, “Tai Sigong, when I watched you Chī Sáu 黐手 your hands were often crossing over, Bóng Sáu 膀手 over Tāan Sáu 攤手 or Tāan Sáu over Bóng Sáu, and touching each other. How do you do this without getting hit?”  Sīfú 師父 smiled and replied, “Many people do not like to use Gāau Chaā Sáu 交叉手 (Crossing Hands)  because they are easily trapped and their opponent can hit them. So for them it is too dangerous. You need to understand how to change your hands over, Bóng Sáu changing to Tāan Sáu and Tāan Sáu changing to Bóng Sáu. After changing you Tāan Sáu might be on top of your Bóng Sáu or the other way around, but as long as your elbow can hold the correct distance and you can turn then in time, then it is not a problem.” Then Sīfú 師父 demonstrated the changing the Gāau Chaā Sáu. I attacked him again and again him he charged and turned one side to the other. He blocked all my attacks very calmly. He then said, “If you understand how to change the Gāau Chaā Sáu it is not a problem and you are not in danger.”