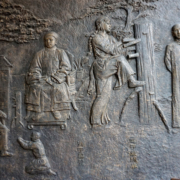 Between 1704 – 1735 the Shaolin Temple 少林寺 was burnt down. One of the leader of was Shaolin Temple, Ng Mui Sitai 五杖師太. Ng Mui 五杖 was her Buddhist name and it means Five Pieces of Wood. Sitai 師太 is a title given to someone who has a high position in the Kung Fu world. In Chinese we always put the surname first and then the title. So for example Ip Man 葉問, people would call him Ip Sīfú葉師父, but if it was one of his students, then they would just call him Sīfú 師父, or in mandarin Shifu (these are the same). The Qing Government清朝 did not like the Shaolin Temple as they thought the monks and nuns were against them and so they attacked and burnt it down. Ng Mui Sitai escaped to Yunnan Province 雲南 and hid herself away in a temple. She stayed at the temple and would sometime go to a local Tofu shop, that was run by a young girl named Yihm Wing Chun 嚴詠春 and her father. Wing Chun was being forced into a marriage with a gangster and so Ng Mui Sitai decided to help her. After seeing a fight between a wild cat and a crane, Ng Mui Sitai changed her Shaolin Kung Fu and created a new style of Kung Fu and copied the movements of the crane which used less energy to defeat the wild cat. Ng Mui Sitai then accepted Wing Chun as her student, and after Wing Chun had gone through her training she defeated the gangster.