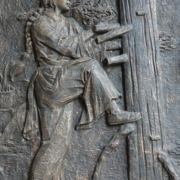 Yìhm Wing Chun 嚴詠春 finished studying the new form of Kung Fu from her Sīfú Ng Mui Sitai 五杖師太 and then returned to Da Leung Shan 大涼山, but before she left she asked her Sīfú, “What is the name of this Kung Fu that I have learnt?” Ng Mui Sitai replied, “What is your name?” Of course Yìhm Wing Chun answered, “My name is Wing Chun.” And then Ng Mui said, “Then call it Wing Chun Kung Fu.” From then on this style of Kung Fu has been known as Wing Chun Kung Fu. Wing Chun is a very beautiful name and very unusual for a Kung Fu style. Most Chinese Kung Fu styles are named after animals or take a family name.