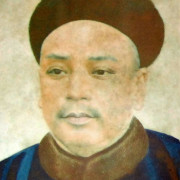 The opera company on the Hùhng Syùhn 紅船, Red Boat, went to Foshan 佛山, Guangdong 廣東 to perform and they were very successful and attracted a lot of people. There was a very famous Chinese doctor, named Lèuhng Jan 梁贊(1826-1901), in Foshan who also came to see the opera. He enjoyed it so much and he soon got to know many of the opera company, in particular Lèuhng Yih Táih 梁二娣. This was probably because they had the same surname Lèuhng. Lèuhng Jan discovered Lèuhng Yih Táih knew Wing Chun Kung Fu and so he asked Lèuhng Yih Táih to accept him as his student. After asking many times, Lèuhng Yih Táih finally agreed, but also introduced him to Wong Wàa Bóu 黄華寶 and so Lèuhng Jan was able to study Wing Chun Kung Fu with both masters!

As Lèuhng Jan was a Chinese doctor, he understood the body and the acupuncture points and channels and so he picked up the skill very quickly and developed a high level. Since that time Wing Chun has passed down in Foshan. As Lèuhng Jan reached a very high level in Wing Chun, he became a very famous Kung Fu master in Foshan and had to take a lot of challenges from masters from different areas of China. However, Lèuhng Jan defeated them one by one! Then he became known throughout Southern China and people called him “Foshan Mr Jan 佛山贊先生”.