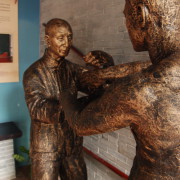 Chàhn Wàh Seuhn (1849-1905) was born in Guangdong Province 廣東省, Shun De District順德區. When he was young he worked in a rice shop and it was said he could carry and run with a 100kg sack of rice. So he was very strong, and he was also good at calculations. Later on he changed his job and would carry a very heavy basket that was full of coins to the market. Then if people wanted to small change they would come to him and change their larger coins and money note. This is why he gained the nickname, Jau Chin Wah 找錢華, which means Money Changing Wah.