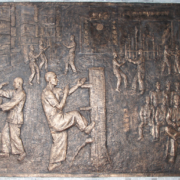 In 1945 the Japanese surrendered and the war was over. Ip Man 葉問 found a job as a plain clothed policeman and so he stopped teaching. His finances slowly got better and so his whole family started to have a better life. Ip Man worked around Foshan 佛山 and Guangzhou 廣州 until 1949. Then the new China started and the People’s Republic of China 中華人民共和國 was established. It was then that Ip Man moved from Foshan to Hong Kong, he was 56 years old.

In July, 1950 Ip Man started teaching his first Wing Chun class in Sham Shui Po 深水埗, Kowloon 九龍, at the Restaurant Workers Union 飯店工會. At first, Ip Man did not want to teach, but he was so poor. On one occasion, Ip Man’s eldest son Ip Chun葉準 came from Foshan to visit and Ip Man fainted because he was so weak and lacked nourishment. So his friend Lee Man 李民, said, “Brother Man, why not teach your Wing Chun Kung Fu?” So Ip Man started his Wing Chun journey in Hong Kong and taught until he passed away in 1972.