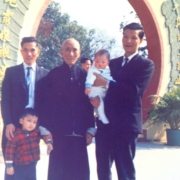 Ip Man 葉問 could never have imagined that when he started teaching Wing Chun Kung Fu that it would become his life’s work and that it would bring him fame. He even had the most famous student in the world – Bruce Lee 李小龍!

Ip Man had two sons, Ip Chun 葉準 and Ip Ching 葉正. Both sons became teachers of Wing Chun, at first teaching part-time and then finally becoming full-time teachers. When Ip Man moved to Hong Kong, his two sons remained in China to continue their studies. They two sons visited their father in Hong Kong three times. Although Hong Kong was at that time British Colony, Chinese people were free to travel back and forth until 1952 when the boarder was closed. So from that time, Ip Chun, Ip Ching and Ip Man’s wife, Jēung Wíhng Sìhng 張永成, had to remain in China and could not visit Ip Man in Hong Kong. Sadly Ip Man’s wife passed away in Foshan and then in 1962 Ip Chun and Ip Ching finally moved to Hong Kong permanently and it was a time when many Chinese people moved to Hong Kong.

Ip Chun and Ip Ching stayed with their father and helped him, and also studied and learned Wing Chun from him. Ip Chun had begun learning Wing Chun when he was seven years old, but then he stopped and he even says he was not interested in Wing Chun. Then he was more interested in Chinese literature and Classical Chinese music and this is what he was studying in China. So when he moved to Hong Kong he began studying Wing Chun again and this was when he was 38 years old.