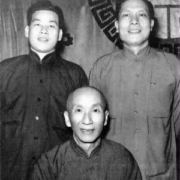 Ip Man 葉問 came to Hong Kong in 1949. He travelled from Foshan to Hong Kong via Macau 澳門, where he stayed for a few weeks. This was the first and only time he went to Macau and never returned. He was 56 years old. In 1950, when he was 57 years old, he began his journey teaching Wing Chun Kung Fu.

From 1953 to 1954 when Ip Man was between the age of 60 to 61, he taught at Hoi Tan Street, Sham Sui Po深水埗海壇街. During this time students like Wong Shun Leung 黄淳樑, Wang Kiu王喬, Ng Chan伍燦and Lee Hon李漢 joined.