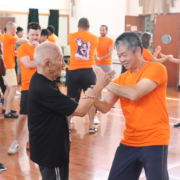 From 1965 to 1972, between the ages of 72 to 79, Ip Man 葉問 closed the Tao Kok Tsui 大角咀 school and most of the time he stayed at home in Tung Choi Street 通菜街, although still taught some close students, private classes and lessons. During this time Ip Man’s eldest son, Ip Chun 葉準, helped him to teach until his death on the 1st December 1972. He was 79 years old. Ip Man dedicated his whole life to teaching Wing Chun. Although there were some other branches of Wing Chun being taught in areas of Southern China, particularly around Foshan 佛山 and Guangzhou 廣州, all the Wing Chun in Hong Kong was from him. He introduced it to Hong Kong and from there it spread throughout the world. Today, most of the Wing Chun we see being practised is based on the skill Ip Man brought to Hong Kong. During the Cultural Revolution, when China’s boarders were closed, very little Chinese skill could spread out. Only those that were already outside China could flourish, until the situation changed and China opened up in 1978.

Ip Man’s two sons together with his top students Leung Sheung 梁相，Lok Yiu 駱耀, Tsui Sheung Tin 除尚田, Wong Shun Leung 黄淳樑 and of course Bruce Lee 李小龍 helped to spread Wing Chun around the world. Of course there were many others who also helped to spread the skill.

I started learning Wing Chun in 1974 with my Uncle, Tse Chui Hung 謝超鴻 and studied with him until he passed away. Then in 1984 I began studying with my Sīfú Ip Chun 葉準師父. In 1988 I moved to the UK where I began teaching Wing Chun full time.