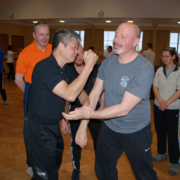 Wing Chun has a special way of doing Faat Ging 發勁. It is commonly known as the One Inch Punch,  Chyun Gihng 寸勁. This is what Bruce Lee called it when he introduced his Wing Chun power to the West. It was a spectacular image and no one in the West had seen or even heard about it before. He demonstrated by putting his fist close to a wooden board and shattered it with his punch. Nowadays everyone knows about this Wing Chun skill.

In Wing Chun, the correct name for this skill is Chèunhg Kìuh Faat Ging 長橋發勁 – Long Bridge Releasing Power. The Long Bridge is the forearm. In Chinese Kung Fu we call the forearm, Kìuh Sáu 橋手 – Bridge Arm. Chèunhg Kìuh 長橋 means to extend the arm. Usually, when we want to hit or break something with our hand, with a punch or a palm (like Tit Sā Jéung  鐵沙掌 – Iron Palm) we will withdraw the hand back to our body or even above our head, rather than hold it in front of the chest. We will then strike out to hit the object, which most of the time is a wooden board, but may be a piece of metal or ice. As the arm is drawn back we can bring more power to our strike. Then when we make contact, the arm is bent and so shorter. We call this kind of power Dyún Kìuh Faat Gihng 短橋發勁- Short Bridge Releasing Power.