Seung Chi Sau 雙黐手 – Changing from Outside to Inside

Changing from the outside to the inside is the complete opposite of changing from inside to outside. In this situation we have two outside hands, Lower Fuk Sau伏手and Upper Fuk Sau and our opponent has a Taan Sau攤手 and Bong Sau 膀手. Once again the change must take place while the hands are rolling, never when the hands are still. 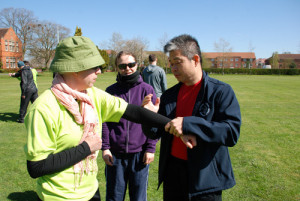 We only change the Upper Fuk Sau and we do this when his Bong Sau starts roll back down to Taan Sau. At that moment we break contact and very quickly roll our hand outside and back down to a Taan Sau. Remember we must only move the hand outside and back into the Centre Line, never withdraw the Fuk Sau into your body, this takes more time and once you draw your hand back your opponent can hit you. When you make your Taan Sau, it needs to be firm. Your opponent should immediately change to a lower Fuk Sau. If he does not change to Lower Fuk Sau quickly enough, you can hit him. Therefore your timing and the changing must be correct then you are safe.

The other side maintains the same sequence of rolling and so should be in the upper position, you have a upper Fuk Sau and he has a Bong Sau. Every time we change our hands from inside to outside we must be clear so the opponent cannot take that chance to hit us.