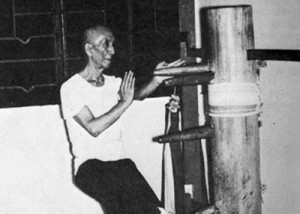 Ip Man was born on 1st October 1893 and passed away on the 2nd December 1972. He was born in Foshan 佛山, Guandong Province in China. Foshan means Buddha Mountain. The story about how it got its names goes that in 628 BC some people digging and they discovered, buried in the soil, 3 statues of Buddha. On unearthing them they saw rainbow colours in the sky and smelled a beautiful fragrance. So people named this place Buddha Mountain. Originally it was called Ji Hwa Village季華村.

Ip Man’s family were very wealthy. They owned many businesses and a lot of land. They had their owned their own ancestral temple and inside the temple some people were learning Kung Fu. As it was very close to their house, When Ip Man was 7 years old, he would like to go to the temple to watch them practising their Kung Fu. After watching for a while, Ip Man learnt that the teachers name was Chan Wah Shun陳華順 and he was teaching Wing Chun Kung Fu.

Little Ip Man liked it very much and so one day he asked Sifu Chan Wah Shun to teach him Wing Chun Kung Fu. Chan Wah Shun replied, “To learn Wing Chun, a student needs to give me 20 Dai Yueng大洋.” That was the Chinese currency at the time and it was a lot of money which enough to pay a house deposite.

The next day, it made Sifu Chan surprised, little Ip Man brought 20 Dai Yeung to give to him. “How could a little boy get that much money?” he thought.