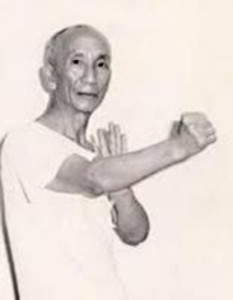 Chan Wah Shun陳華順 Sifu took the 20 Dai Yeung大洋 from the 7 year old Ip Man. However he said to Ip Man, “I cannot teach you. Also I will not give you the money back.” Ip Man looked at Chan Wah Shun and knew something was not right. If Chan Wah Shun took the money he should accept him as his student, if not, then he should give him his money back. Then Chan Sifu said to him, “If you want your money back, your mother has to come and get it.”

Later Ip Man returned with his mother. Chan Sifu explained what Ip Man wanted and asked if she had given Ip Man the money. Ip Man’s mother replied that she had given him the money and went on to say that she knew Ip Man was not strong and so need some training to make him healthier, stronger and more focused, and what better way than learning Kung Fu? So Ip Man became Chan Wah Shun’s youngest and last student.

In the past learning Wing Chun was not easy and you needed a lot money to train. This was because you need to practise Chi Sau黐手 and so you need a partner. The teacher had to spend more time and put more focus on a student than just teaching them movements and postures. Therefore studying was for dedicated and wealthier students and Ip Man was one of those.