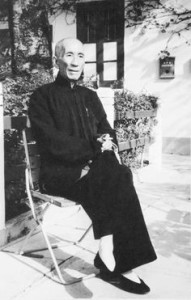 When Ip Man touched Fung’s uncle’s hands he immediately knew that he had a very high level of skill. Ip Man remembered what his Sifu, Chan Wah Shun陳華順 had told him, “When you Chi Sau with someone and their hands are hard and full of strength you do not need to be afraid. But if their hands are soft like an old towel (an old towel is soft and makes better contact with the skin), always keep contact with you, and no matter what happens their hands are in a better position and when they attack you their hands stick to you, then you must be careful as this person has a very high level of skill.” This was the kind of feeling Ip Man got from touching Fung’s Uncle’s hands. Even Ip Man’s Sifu, Chan Wah Shun, did not have this high level of skill his hands were so soft and “sticky”. During the Chi Sau, a couple of times Ip Man thought he had found a gap through which to attack, but each time he tried Fung’s Uncle changed and solved it very easily. He just slightly changed and made Ip Man attack become nothing. Ip Man even had the sense that Fung’s Uncle could attack him, but he did not. No matter how many ways he tried to attack it ended in the same result. Ip Man began to get frustrated and angry and this made him use more power when he attacked Fung’s Uncle.