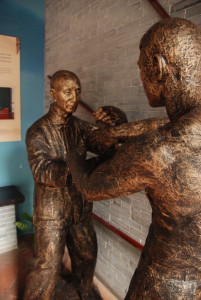 Ip Man began to speed up and use more and more strength, punching quite fiercely at Fung’s Uncle’s face. Suddenly Fung’s Uncle changed position and he was not there and so Ip Man hit only air. But suddenly he felt a palm on his right shoulder and another on the side of his ribcage and the next thing he knew, he was on the floor! Ip Man knew that when his punch had missed his body was off balance. This allowed Fung’s Uncle to move to his right and use the famous Wing Chun technique “Lose Hand Pouh Paaih漏手抱琶” on him. This was a Wing Chun dummy technique, but Ip Man had never known how to use it properly. Now had seen and experienced it.

When Ip Man got up, his face was red with embarrassment. He was a young man whose name had begun to spread out because of his good Wing Chun Kung Fu and now he had been beaten by an old man! He could not face it and so picked up his traditional long clothe and quickly left Fung’s house. This Chi Sau really made him think about his level of Wing Chun.