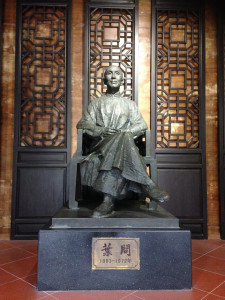 Ip Man was so surprised to hear the name Leung Bik梁璧. Leung Bik was his Sigong Leung Jan師公梁贊’s, eldest son! Leung Jan was the person who had brought Wing Chun to Foshan. Throughout Chinese official history you can only really trace the roots of Wing Chun back to Leung Jan. All the other history before is based on the stories passed down from each Sifu to his students. Leung Jan was the only person you could really prove existed (and this means Leung Jan’s Wing Chun skill was more like the Wing Chun we see today).

Leung Jan had a Chinese medicine clinic and was a famous Chinese Doctor as well as a martial artist. He ran his clinic and taught Wing Chun Kung Fu, but during his lifetime, he only taught one student, Chan Wah Shun陳華順. So Chan Wah Shun represented Leung Jan’s Wing Chun. Everybody else who knew Wing Chun must have studied with Chan Wah Shun. However, Leung Jan also taught his eldest son. Usually when a father teaches his son he will be stricter, more detailed and teach him better. So Leung Bik reached a very high level of Wing Chun. Leung Jan’s second son Leung Chun 梁春 inherited his father’s Chinese medical skill and continued to run the family clinic after Leung Jan passed away.