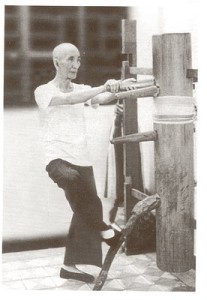 Ip Man was very happy. He missed his Wing Chun training. He could practise his forms on his own, but he missed Chi Sau黐手. He had a wooden dummy in Foshan, but he could not practise here in Hong Kong. He knew that the essence of Wing Chun training was Chi Sau. But now he could visit Uncle Leung Bik 梁璧 who he knew was very good at Chi Sau, and if Uncle Leung Bik would teach him then that would be so good! So, every day after finishing school, Ip Man went to see Leung Bik. Leung Bik was also very happy as he had no students and no children. He could see that Ip Man was talented and that one day he could bring Wing Chun to a very high level. Leung Bik was also able to read people’s faces so he could tell their energy and could see if they would have a good future. He could see that one day Ip Man would be a very famous master. This was traditional Chinese knowledge, a person’s look, their attitude and their energy would decide their future and Ip Man had that positive energy.

When Ip Man met Leung Bik for his first lesson Leung Bik said to him, “Do not let Kung Fu structures control you!不要比功夫玩死！ ” Ip Man had never heard that before.