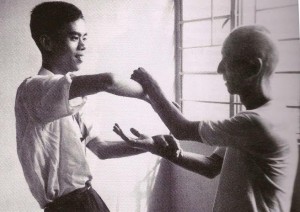 When Ip Man met Leung Bik for his first lesson Leung Bik said to him, “Do not let Kung Fu structures control you!” Ip Man had never heard that before and did not understand. Leung Bik smiled and then explained, “Many people who learn Kung Fu are just focusing about their postures and structures. They become so concerned that a certain movement must follow this structure and so on that they become so stiff. Their movements do not follow on and flow, so they do not read their opponent’s energy.” Listening to this Ip Man suddenly found he understood some things more deeply.

Leung Bik continued, “Chi Sau is not fighting, it is two people practising their Wing Chun Hand Techniques to develop their skill and make it better. Most people treat Chi Sau like fighting. They will not develop their Wing Chun skill well as they only concentrate on attacking and miss how to defend themselves. To defend we need to be able to read our opponent’s energy. We need to relax so that we can feel their strength and before they have even moved we have responded perfectly. We need to focus on feeling our opponent’s energy and their movements then our response will be right and you can use less strength. Then you might even develop your own techniques. This is not letting the Kung Fu structure control you.”

After this Ip Man began to change his aggressive style of Chi Sau and become gentler and softer.