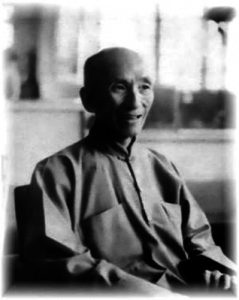 As Leung Bik梁璧 Chi Sau黐手’d with Ip Man he found that Ip Man attacked using punches and palm strikes, because of this Leung Bik could tell that Ip Man did not know enough about body structure. Then as Ip Man punched at him he suddenly used Laap Sau擸手 to pull him down. Ip Man tried to attack again and Leung Bik used Tok Sau托手 to control Ip Man’s Bong Sau膀手 and pushed him right up into the wall. Ip Man lost his balance and Leung Bik laughed at him which made Ip Man feel a little embarrassed.

Leung Bik held out his hand and helped Ip Man up. He said to Ip Man, “Wing Chun techniques are not just about hitting we can also control our opponent making them lose their balance, so you need to use more Laap Sau, Tok Sau, Kau Char Sau交叉手 and Wang Lan Sau横欗手. Sometimes controlling our opponent is better than hitting them, and by doing this you can stop a fight without really hurting them too much.”

He continued to say, “Do you know I have a medical background? Studying Chinese Medicine is equal to studying Kung Fu. We must know the body’s weaknesses and how it functions. Then we can heal them, but this also means we know how to hurt them and also control them as well. When you know about the body you will know how to control their joints and make them unable to use their strength and so they cannot use any energy. For example grabbing their wrist and elbow, crossing their arms and pushing them into the centre of their body, we can even hold their neck. All these techniques can be used to control them.”

Leung Bik showed Ip Man how to use these Laap Sau, Tok Sau, Kau Char Sau and Wang Lan Sau techniques to make this opponent lose his balance, but he knew so many ways to use them, which all depended on the position of the opponent and how he was standing. Leung Bik was able to control and make Ip Man lose his balance in less than a second. This made Ip Man smile broadly and he opens his eyes wide in amazement!