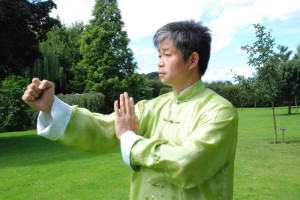 Anybody who trains martial arts, and even some who do not, have heard the name “One inch punch”. This was one of the techniques made famous by Bruce Lee 李小龍 that impressed so many western martial artists. Actually this is one of Wing Chun’s powerful techniques. Its proper name is Long Bridge Releasing Power, Cheong Kiu Fa Ging長橋發勁. Cheong長 means long, Kiu 橋 means bridge. Long Bridge means the arm is extended out. In Chinese Kung Fu we call the forearm— the Bridge Hand. Because when we are fighting it is common for the forearms to contact together like a bridge between the two opponents. Fa 發 means release and Ging 勁 means internal power.