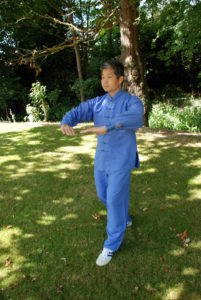 In Wing Chun training we use Bóng Sáu 膀手 regularly. The more we use it the more comfortable  we are and the better we are at using the Bóng Sáu energy. During my early days of Wing Chun whenever I used Bóng Sáu it was always a single Bóng Sáu then one day, when I was practising Chi Sau to my students I found myself using Double Bóng Sáu 雙膀手! It was an amazing and unexpected experience. Now when I look back I realise that I liked to follow my students’ energy and let them do whatever they wanted. I would quite normally have one Bóng Sáu and one Taan Sau in contact with my opponent’s hands. Then if they pressed down on my Tāan Sáu 攤手 it would automatically change into a Bóng Sáu, even though I already had my other hand in Bóng Sáu. So it became Double Bóng Sáu. Then I would relax and wait for their next move. However they were not normal Bóng Sáu they were Low Bóng Sáu 底膀手 with the shoulder higher than the elbow. They were soft however and so this meant that Low Bóng Sáu can be soft and gentle like a normal Bóng Sáu. A normal Bóng Sáu is soft so that it can feel the opponent’s energy and redirect it. Low Bóng Sáu can be soft, but it cannot redirect the opponent’s energy to the side.