Gong Lik功力 is the source of our power. Without Gong Lik all the Ging勁 is useless. It would be like a child hitting an adult; the child might hit the adult in the right way, in the right area that would usually cause pain but because they do not have power (Ging), then their hit is not effective. 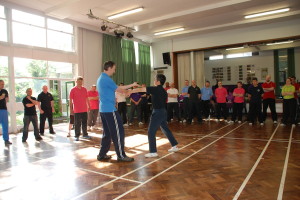 Gong Lik is like the engine in a car. The petrol is the Qi and we need both the engine and petrol to make the car run well. Gong功 is work. Lik力 is strength. Working to develop the strength is Gong Lik, but it is internal training (Noih Gong內功).

In the old time China, if there were two masters who challenged each other. They already knew who would win the challenge. This is because they could sense each other’s energy with just one touch and so already knew whose Gong Lik was more powerful. This is not an external power that is developed through lifting weights. It is an internal power that comes from the bones. That is why traditional Chinese martial arts has a lot of stance training, like Mah Bo馬步(Horse Stance).

When we contact someone’s hands we might sense their power inside them even though they are not using it. On the outside it may feel like nothing, but inside it is very powerful. Once we move to attack, they will use it and make us lose balance and so defeat us. Even if we do not move and they will move first, it will have the same result and so we will lose.  A high level opponent can even use their Gong Lik to exhaust their opponent when doing Chi Sau.  So the masters do not need to fight they can tell one is the best. This tells us how important it is to develop our Gong Lik.